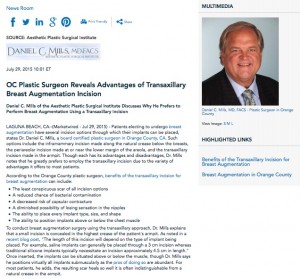 Laguna Beach, CA — Patients electing to undergo breast augmentation have several incision options through which their implants can be placed, states Dr. Daniel C. Mills, a board certified plastic surgeon in Orange County, CA. Such options include the inframammary incision made along the natural crease below the breasts, the periareolar incision made at or near the lower margin of the areola, and the transaxillary incision made in the armpit. Though each has its advantages and disadvantages, Dr. Mills notes that he greatly prefers to employ the transaxillary incision due to the variety of advantages it offers to most patients.

According to the Orange County plastic surgeon, benefits of the transaxillary incision for breast augmentation can include:

To conduct breast augmentation surgery using the transaxillary approach, Dr. Mills explains that a small incision is concealed in the highest crease of the patient’s armpit. As noted in a recent blog post, “The length of this incision will depend on the type of implant being placed. For example, saline implants can generally be placed through a 3 cm incision whereas traditional silicone implants typically necessitate an incision approximately 4.5 cm in length.” Once inserted, the implants can be situated above or below the muscle, though Dr. Mills says he positions virtually all implants submuscularly as the pros of doing so are abundant. For most patients, he adds, the resulting scar heals so well it is often indistinguishable from a natural crease in the armpit.

Since the transaxillary incision never comes in contact with breast tissue, Dr. Mills states that he has found a significantly reduced chance of implant bacterial contamination, as well as a decreased occurrence of capsular contracture. Furthermore, he discloses that this approach can provide the smallest risk of losing nipple sensation because of how far the incision location is from the nerve extending to the nipple.

Ultimately, Dr. Mills notes that several studies have revealed women receiving breast implants have a statistically higher preference for the transaxillary incision. “I have performed thousands of transaxillary breast augmentation procedures,” he adds, “beginning when I was in plastic surgical residency in 1985. I have even been invited to perform live surgery using this technique on three continents for various plastic surgery organizations. In my opinion, there isn’t a bad indication for this incision.”

Dr. Mills obtained a chemistry degree from Walla Walla University prior to earning his medical degree at Loma Linda University School of Medicine. Subsequently, he completed his requirements for the Board of Plastic Surgery as well as his requisite three-year training in general surgery at Wright State University, followed by his plastic surgery residency at the Medical College of Ohio and additional fellowship training in Phoenix, Arizona. Certified by the American Board of Plastic Surgery, Dr. Mills offers a comprehensive span of cosmetic procedures for the face, breasts, body, and skin at his Laguna Beach practice, the Aesthetic Plastic Surgical Institute. He is available for interview upon request. 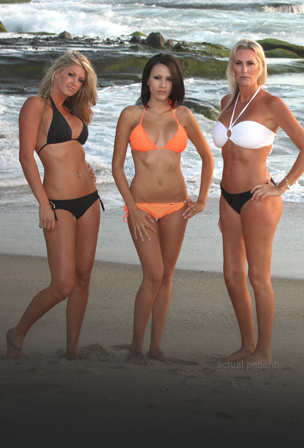